In the former, the viewer of your photograph tends to think about the scene from the "viewpoint" of the included person, and the relationship of that person to the scene.

The viewer's interest is heightened with thoughts such as "What would it be like to be there?" or "What is that person experiencing?".

In one photograph is this collection, the "person" is actually a statue.

In another photograph, only part of the face of the included person is shown, causing the viewer to wonder more about her.

Often the included person is positioned such that they do not "see" the photographer, implying that we have the privilege of enjoying (or suffering through) their experience with them.
© Jerry Weimar Photography 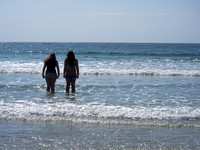