21 photos
Using natural frames within the scene to highlight your subject often adds interest for the viewer.

Once your eye begins to look for them, you'll realize that natural frames are almost everywhere (though they shouldn't be over-used).

Trees, windows, buildings, fences, door ways, terrain shapes and many other things can all be used as natural frames. In one example here, a rainbow is used to frame The Maid of the Mist at Niagara Falls.

Frames can be composed from similar objects, such as two trees.

Frames can also be composed from different objects. In one example here, a tree and a lamp-post are used to frame a building in Quebec City.

The edges of the frame need not be the same size, or at the same distance. In one example here, Big Ben is framed by two lamp-posts at different distances.
© Jerry Weimar Photography 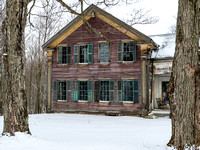